Getting the lay of the land

The most important thing to specify before starting is the location of our viewing point, although for many followers it will be evident at first glance.

In the background image our observation point is in fact near the village of Castiglione Falletto, therefore not far from the geographical center of the denomination. This is a point from which it is possible to observe with detail a major part of the denomination (see the second image) and the most famous cru vineyards with the exception of the western side of La Morra, Novello and Verduno, which faces toward Monviso, the southern part of Monforte d’Alba, which faces the Alta Langa, and the eastern side of Serralunga d’Alba.

What is of primary interest to us, however, is understanding the structure of the territory.

As can be seen in the third image, the Barolo zone is distinguished by three main ridges oriented in north-south trajectories. The first runs from the MGA Monvigliero, in the commune of Verduno, to Novello, passing through La Morra and Bricco del Dente, the highest point of the ridge. The second, located right in the center and to which can be added the ridge that joins Bricco San Pietro and the MGA Boschetti, starts in the northernmost part of the commune of Castiglione Falletto and ends near the town of Monforte d’Alba, passing through Bricco Giubellini and Bricco Bastia (the latter is not visible in the picture), which, together with Bricco del Dente, are the three highest points of the Barolo zone. The third ridge lies almost entirely in the commune of Serralunga d’Alba, increasing in elevation as it runs from Fontanafredda, in the north, to Arione, in the south (not visible in the image, but just beyond Francia).

While on the subject of the structure of the territory, a look at the fifth image can be of further help as it provides an even broader and more complete view of the appellation. Castiglione Falletto is now in the background, while beneath us lie Monforte d’Alba and Bricco Bastia, the highest point in the Barolo zone. To the right and left lies the southern part of the denomination, previously hidden from view. Unlike almost all the other visible areas, this  faces directly toward the Alta Langa, which, as will shall see, is an influential factor.

Another strategic point is the MGA Ravera, visible in the sixth image, and in particular the two hills of Cascina Nuova and Bricco Pernice, which close the Barolo valley to the south, separating it from the southern part of the denomination, in particular from the area that goes from the Manzoni soprani (MGA Bricco San Pietro) to the MGA Sottocastello di Novello.

No less important is the seventh image, which, though it shows only a part of the Western Slopes of the communes of Barolo, Novello and La Morra, reveals that this sector has a much gentler conformation than the rest and faces in a completely different direction: toward the Alps and the wide plain of the Tanaro river.

Following this introduction, we now consider the elevation.

Returning to the first image and making a quick comparison of the highest and lowest points, it can be seen that differences in elevation can be as much as 300 meters, which for any grape variety, and Nebbiolo in particular, is a highly significant consideration.

As for exposure, the optimal range for Nebbiolo covers terrains oriented toward east-south-west. Given the same elevation, soil, vintage and slope (an essential factor as well), exposure to the east is generally the coolest, while the warmest is to the southwest, though it is often assumed that full southern exposure is hotter. Eastern exposure tends to enhance the fruity character of the wines, the acidity and freshness of tannins, while exposures toward the south and southwest tend to account for less fruitiness, greater alcohol and more earthy and austere tannins. Southeastern exposure tends to have more in common with full east than full south, whereas western exposure accounts for greater warmth than eastern exposure and at the same time less heat intensity than south or southwest.

To have unequivocal visual proof of the influence of exposure, just click on the two images below. One is taken from the ground and the other from satellite (source: Google), but both are related to the valley of Serralunga d’Alba, showing clearly how the warmer positions, south and southwest, are also those where the snow melts first. This factor accents a typical feature of the hills of Barolo, namely the herringbone patterns of the ridges, a theme we’ll return to later though evidence of the phenomenon can be noted in the last  panoramic image. 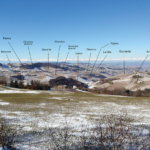 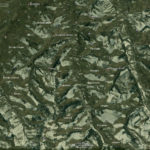 Soil and microclimate are more complex considerations, and for that reason I decided to dedicate a specific section to each.