Menzione Geografica Aggiuntiva or MGA (sometimes also abbreviated as Me.G.A.) refers to a specific area officially defined within the production zone of Barolo DOCG. Simply put, an MGA can therefore be seen as the equivalent of the French terms cru or climat. 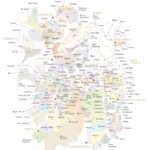 The MGA system was introduced with an amendment to the production regulations on September  30, 2010, and has been in effect since the harvest of that same year.

Although greater numbers may be noted in some reports, there are 170 officially recognized MGAs – obviously any that extend into two communes are to be counted once. To these must be added the 11 Communal MGA that I will write about later.

Since, by tradition, viticulture in the Barolo zone is not limited to a single vine variety, the MGAs refer both to Nebbiolo vineyards for the production of Barolo DOCG and vineyards planted with other varieties. Also, for reasons that would require a complex explanation, MGAs can take in woods and land devoted to other crops.

The MGAs – it’s important to emphasize this – do not imply superiority in a qualitative sense. A Barolo carrying the name of an MGA on the label is not necessarily better or more valuable than a Barolo with another name or even with no name at all. The fact is, though, for many producers, Barolo wines with an MGA usually represent the most prestigious wines in their lists.

Strange as it may seem, European laws prevent the use of two or more MGA names together on the label, thus effectively erasing a noble and well-documented tradition of Barolo obtained by blending various vineyards. On the other hand, if the MGAs are situated in the same commune, the label may specify “Barolo del Comune di Barolo” or “Barolo del Comune di La Morra” and so on.

Although contradictory, the same law that prevents use of two or more MGAs on the label allows the producer to add up to 15% of Barolo obtained from a second MGA to a Barolo with an MGA stated on the label.

And now some words of caution

1) As accurate as one might try to be, drawing borders on 360° aerial images is no simple matter, and for this reason they are to be considered purely indicative, whether they are borders  of communes or MGAs. As for any blatant errors, I ask forgiveness and urge you to report them to me without hesitation.

2) With regard to borders, in the case of MGAs, I have highlighted only the vineyard areas and not their total territories, which almost always take in spaces dedicated to other crops or woodlands, or more rarely to habitations.

3) Since in recent years I have received many requests in this regard, I decided to take a further step and include in the entries of many MGAs suggestions of one or more wines (under Recommended tastings) for those who would like to taste and better understand the style of the MGA in question. Clearly these are good wines, but having mentioned them does not imply that they are the best on the market or my personal favorites or the most prestigious. They simply lend themselves better than others to the purpose. Moreover, it is good to remember that the character of a wine, especially if it is a matter of nuances, is more easily captured by comparing it with a wine from another MGA, better if from the same producer. For this reason, where useful or possible, I also indicated some labels to be used as touchstones. The important thing is that the comparison is made with the same vintage and with wines that are not too old, otherwise you would lose the fruity component that is often one of the distinguishing factors in tasting.

4) At the end of each MGA entry, graphs record the surface area in hectares and the altitude difference in meters. But it might be that for those who don’t know the region in depth, mere numbers are not of much help. Without a specific reference, three hectares can seem to be a lot or a little, and the same could be said about elevation or differences in height. For this reason I decided to display the numbers in two graphs whose extremes are respectively: 1) for the surface area, a range from zero to the surface area of the Bricco San Pietro MGA (the largest of all with 380 hectares); 2) for the elevation, the lowest and highest elevations within the Barolo zone, (however, due to graphic exigencies, the minimum altitude – of 160 meters – is about 30 meters lower than the actual one).

6) Some of the 170 officially delimited MGAs lack a panoramic landscape image. This is not due to minor importance, but simply to the fact that to date I have not been able to produce satisfactory images.

7) Not all MGAs rate the same degree of in-depth analysis, which may depend on several factors: dimensions, complexity and ultimately reputation. However, I do not rule out further additions when and if conditions warrant them.

8) For some MGAs I have also indicated the owners or renters of individual plots, whether they make a wine from it or not. The important thing is that they have a winery or cellar. As many of you know, such information can be found in my book Barolo MGA Vol. 1. However, transferring data from print to digital is a long and laborious process, so, for now, I decided to do it only where practicable, where changes in ownership/rental were less likely and, above all, the graphic result was attractive and readable (Cannubi or Brunate, for example, are not very suitable). With time I promise that the others will follow.

In conclusion, some notes about the use of the word “Vigna”.

Unlike the MGAs, limited in number and in surface area by the production regulations, the “Vigna” names are not subjected, from this point of view, to any restrictions (except for the fact that these names must be registered together with their cadastral data in a register which has been kept by the Piedmont regional government since August 1st, 2011).

The officially recognized vineyards (“Vigna”), therefore, can be seen as a continually evolving phenomenon whose eventual significance is impossible to estimate, both in numerical terms and in the surface area these vineyards cover. Moreover, the absence of clear, homogeneous, and limiting rules has had as a consequence that individual producers can interpret as they wish how to use the word “Vigna”, some attributing it to a place name which can be shared with other houses while others, instead – and they are the majority – transform a traditional name into what is effectively their own proprietary name, however tied to a specific area it might be.

And finally, from a strictly formal point of view, it would be well to recall that the term “Vigna” can only be used on a Barolo label alongside the indication of the MGA in which the Vigna is located or of the township which is the source of the grapes (which does not indicate any sort of qualitative superiority on the part of a Barolo with the indication of a “Vigna” compared to another solely with the indication of an MGA). In these cases, the vineyard yield cannot exceed 7.32 tons per hectare (2.9 tons per acre) and the minimal alcohol level must be over 13°.