The Barolo zone, officially delimited in 1966 with the recognition of Denominazione di Origine Controllata (DOC) and, in 1980, with the introduction of Denominazione di Origine Controllata e Garantita (DOCG), takes in 11 different communes. These are Barolo, Castiglione Falletto and Serralunga d’Alba, which lie entirely within the zone, and Cherasco, Diano d’Alba, Grinzane Cavour, La Morra, Monforte d’Alba, Novello, Roddi and Verduno, which lie within it in part.

In this section I have dedicated to each of them a short introduction describing the main features of the communal territory  and the MGA subdivisions, leaving further details to be analyzed in depth under each single MGA entry. This for two reasons: 1) the study of a territory must, in my opinion, proceed step by step; 2) with more detailed information, the profiles of many communes would have become too extensive to be consulted on the web.

To accomplish this task I have often had to resort to images that cover a much larger portion of the territory than those that appear with the MGA entries. This means that in some cases the boundaries may not be perfectly accurate, but still close enough for our purposes. In general, in the introductory images that illustrate the various sectors and slopes within the communal territory, I have highlighted all of the vineyards that lie within the commune, while in the detailed images of the individual sectors or slopes I have usually highlighted only the vineyards that fall within the various MGAs concerned. 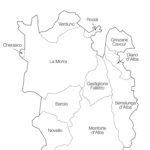 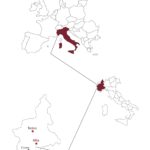 For your reference, here follows a summary of the various details of the production regulations for Barolo DOCG.

On the label – in addition to the appellation name Barolo and, in certain cases, the specification of “Riserva” status – can appear:

The township which is the source of the grapes
(e.g. Barolo del Comune di Barolo – Barolo of the township of Barolo)
Menzione Geografica Aggiuntiva (MGA or “cru”)
(e.g. Barolo Brunate / see page 40)
Vigna (“vineyard”), but only when used along with the name of a MGA
(e.g. Barolo Bussia Vigna Colonnello / see page 313)

In this last case, the addition of the word “Vigna” is not necessarily an indication of superior quality compared to that of a Barolo which carries solely the MGA indication, and this despite the fact that the use of the word “Vigna” obliges the producer to reduce yields by 10%, from 8 to 7.2 tons per hectare (from 3.2 to 2.88 tons per acre).