In the history of Barolo, and not merely of Barolo, the vintages which presented themselves at their origin as problematical have been anything but rare. But, in a hypothetical classification of all the vintages, very few would be able to rival 2018. In fact, after a 2017 marked by a long dry spell, this vintage, quite to the contrary, was characterized by its raininess,  second in terms of rainfall only to 2002.

Unlike this latter vintage, however, in 2018 the rains were concentrated principally during the initial period, particularly the month of May. As it is well demonstrated in the first graph, even more important, however, were the overall number of days of rain, often accompanied by above average temperatures which,  operating synergistically with the precipitation,  forced cultivators to constantly battle outbreaks of downy mildew (there were 24 days of rainfall during the 44 days between May 1st and June 13th, a critical moment in the growing season).

And, as far as temperatures are concerned, the months of July and August were more in line with the levels of the period from 2007 to 2016, with the exception of the peaks registered during the first week of the latter month. Well above the average, instead, was the month of September  with periods often above 86° Fahrenheit (30° centigrade), accompanied by equally elevated levels of humidity and rather limited temperature swings between daytime and nighttime. Swings which, instead, were more significant between September 25th and October 3rd and were an authentic benediction for the Nebbiolo grapes.

In terms of the harvest and the potential stylistic (not qualitative) effects on the future wines, more than the intense rainfall of October 11th, an unexpected role may have been played by the weather forecasts which announced rains for the weekend of October 7th (which then did not arrive) and, in this way, convinced many producers to begin picking a few days before they had intended to.

As far as quality is concerned, it is permissible to think that the 2018 vintage will be classified in the future as of good level, but not more.  At the same time, according to the opinon of many producers and professionals, it will also be a vintage in which the most prestigious crus will have an important edge (as they surely had from a viticultural point of view).

Days of rain per month 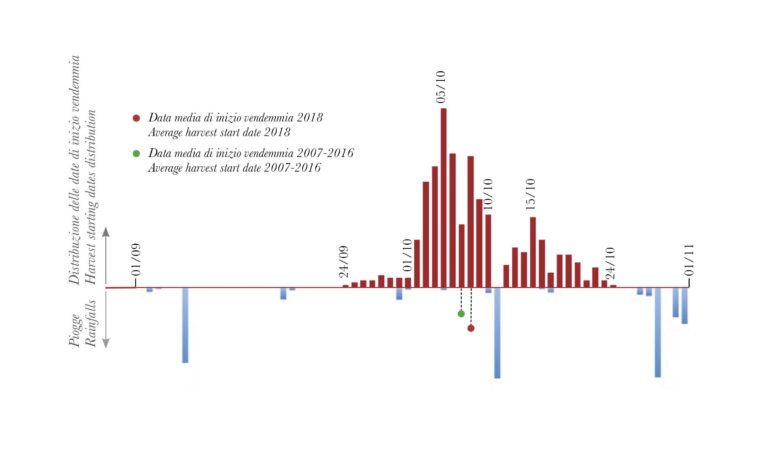